Superhero University. A program that promises to help you become a real superhero with their free course, complete with a degree. It looks nice on the outside, but is it actually legit? I and several other people investigate.

This first came to light on a Facebook account created by Harbinger in Texas that has since been shut down, linking to Instagram posts full of TikTok videos and pretty clever marketing techniques.

Nobody in the RLSH Community had even heard of this Harbinger until he started marketing this book, suggesting he only exists as a marketing technique, even though he claims to have been doing this for 16 years. 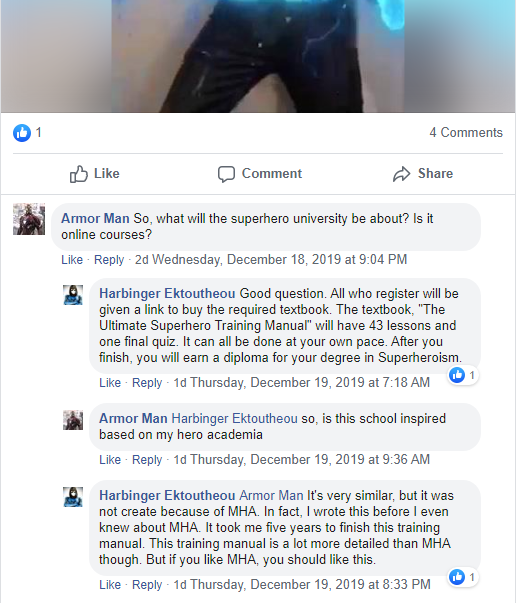 "Superhero University is a unique online educational institution that specifically trains average citizens how to be superheroes. Most colleges charge an arm and a leg, weighing people down with a heavy burden of debt; however, Superhero University offers FREE tuition to everyone who enrolls! The only purchase you'll ever have to make is when you buy the required textbook for the degree program; however, that money will go toward multiple charities.

The ultimate end goal is to create more superheroes in this world. Why? Because we have enough evil villains!

Here at Superhero University, we desire to challenge you and take you out of your comfort zone. It is not enough to merely know about superheroes or even dress up like a superhero - you must act like one! The Ultimate Superhero Training Manual will teach you how to take the character qualities of a superhero and apply them to your everyday life!

The Ultimate Superhero Training Manual consists of 43 lessons, with a short quiz after each lesson. At the end of the training manual, there will be a final test. If you pass the final test, you will graduate, become an official superhero, earn a degree in Superheroism, and receive a real diploma certified by Superhero University."

There is currently no degree in "superheroism". There also is no Superhero University registered anywhere. It only exists on social media and a website he created on Wix. Furthermore, he admits that the course is only bait. 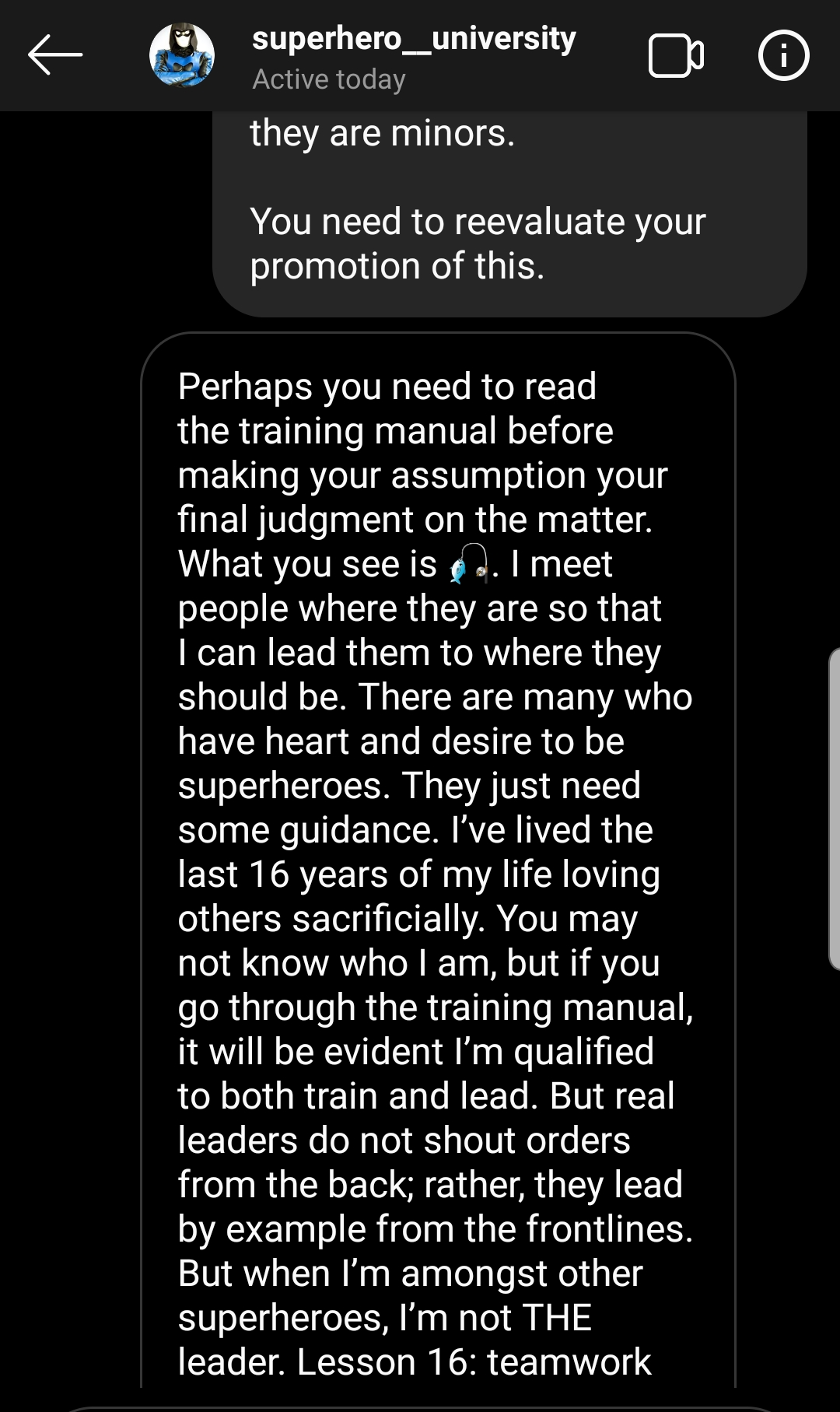 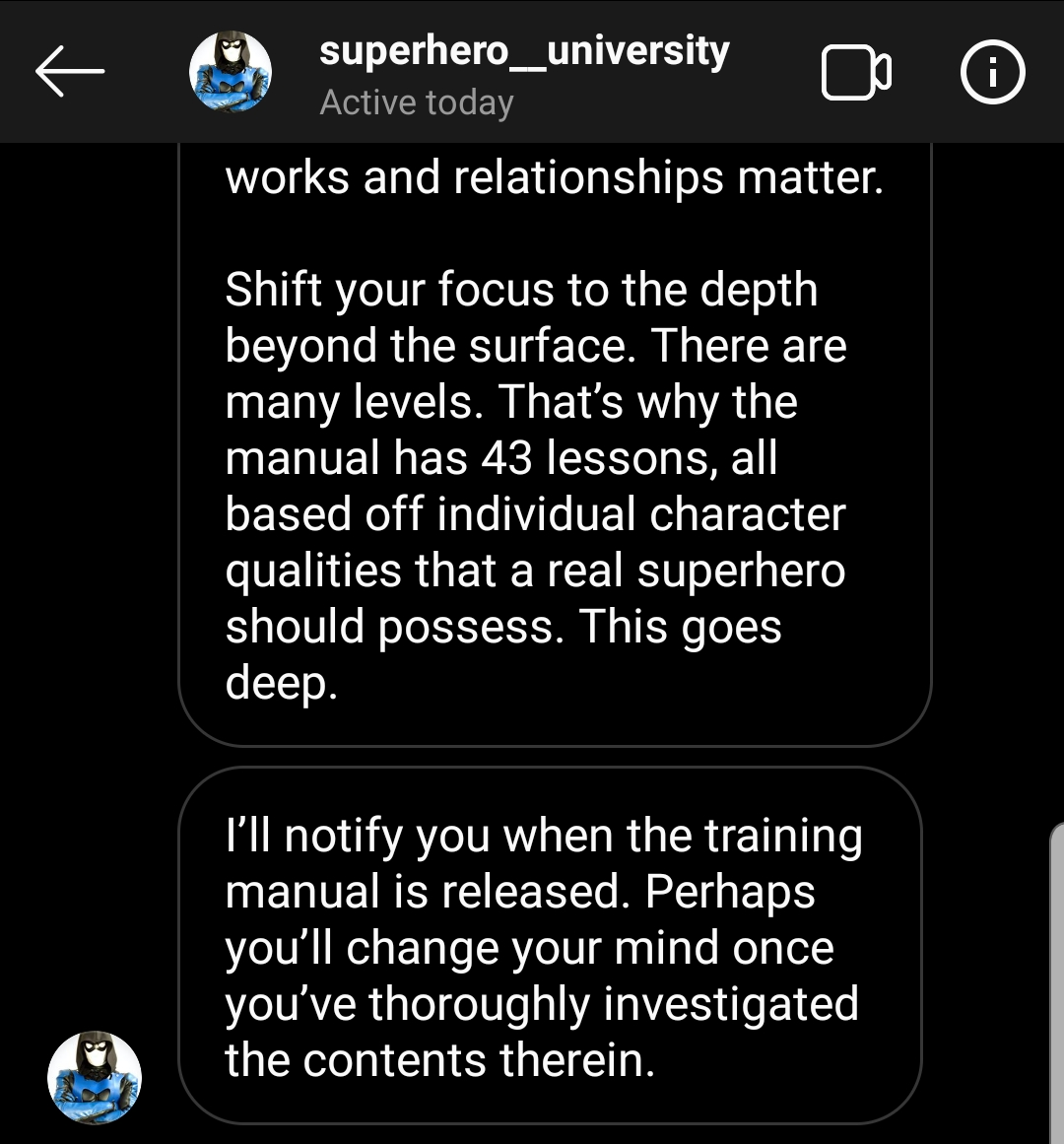 Another thing is that the course might be free, but the book is required and has a cost (estimated $30).

He says that the money from book sales goes to charity, but those charities cannot be completely verified (A Good Life for Children does seem to exist, but there is not much in the way of information on them), and he hasn't stated exactly how much would go where. This may change in the future. 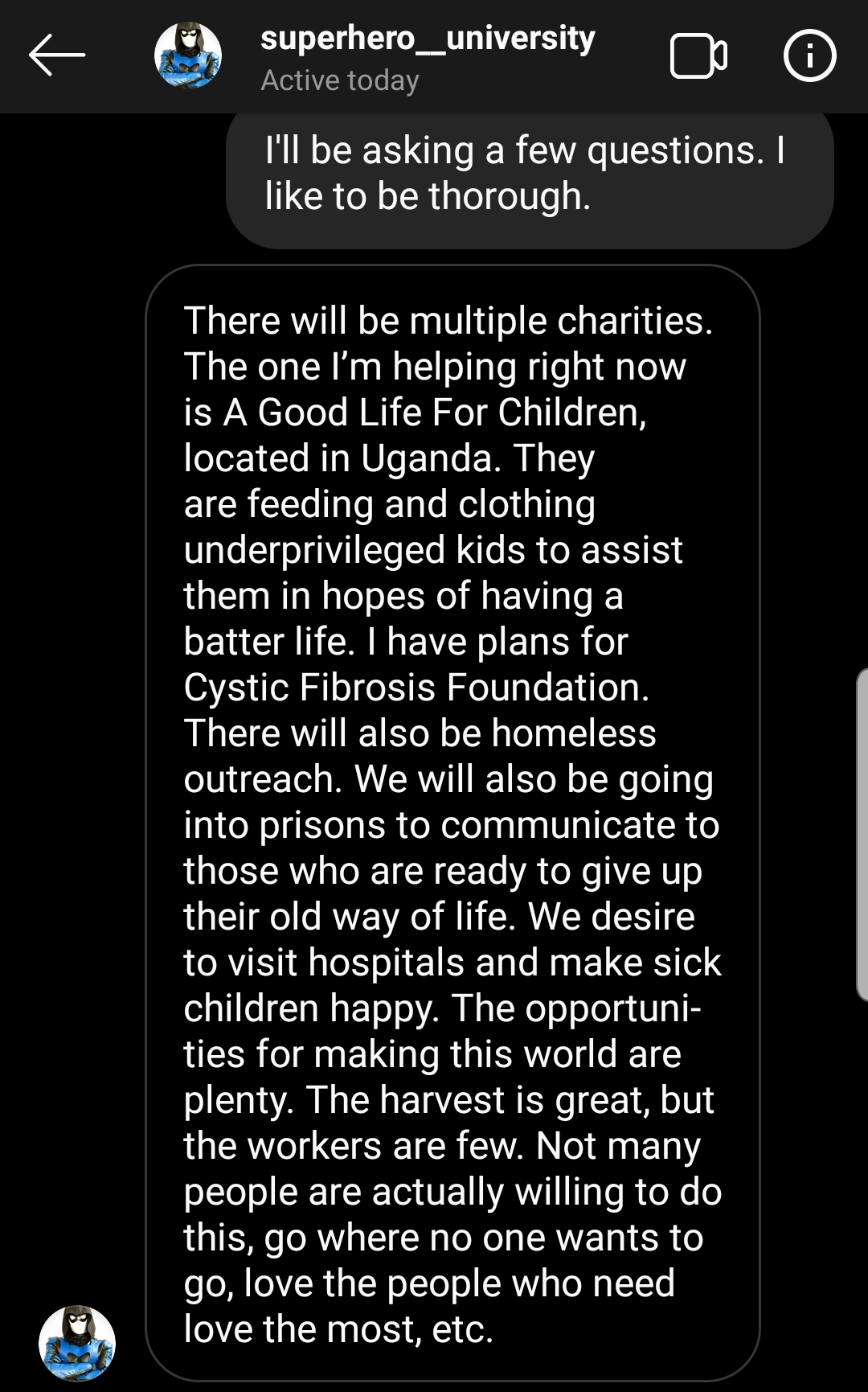 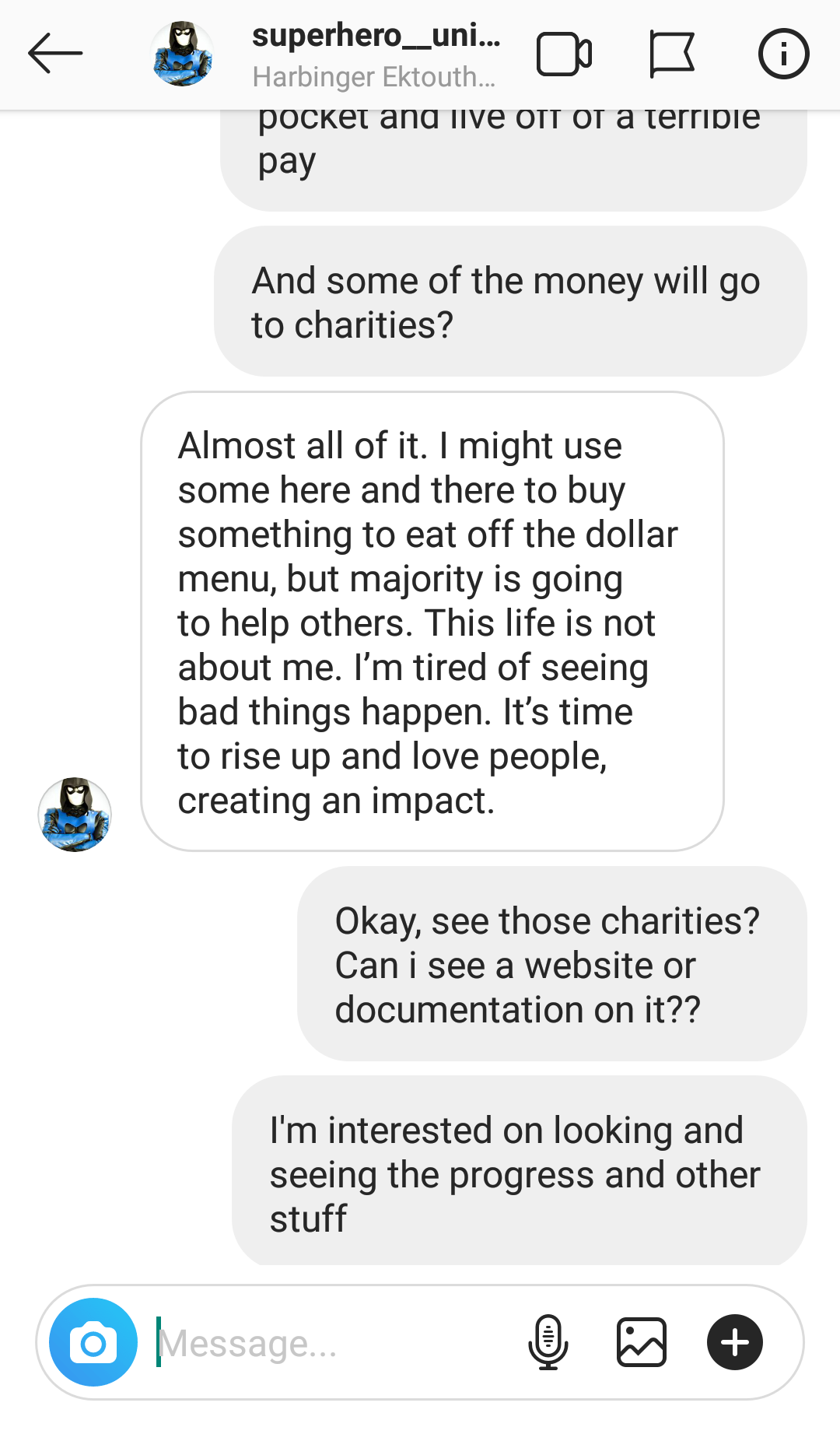 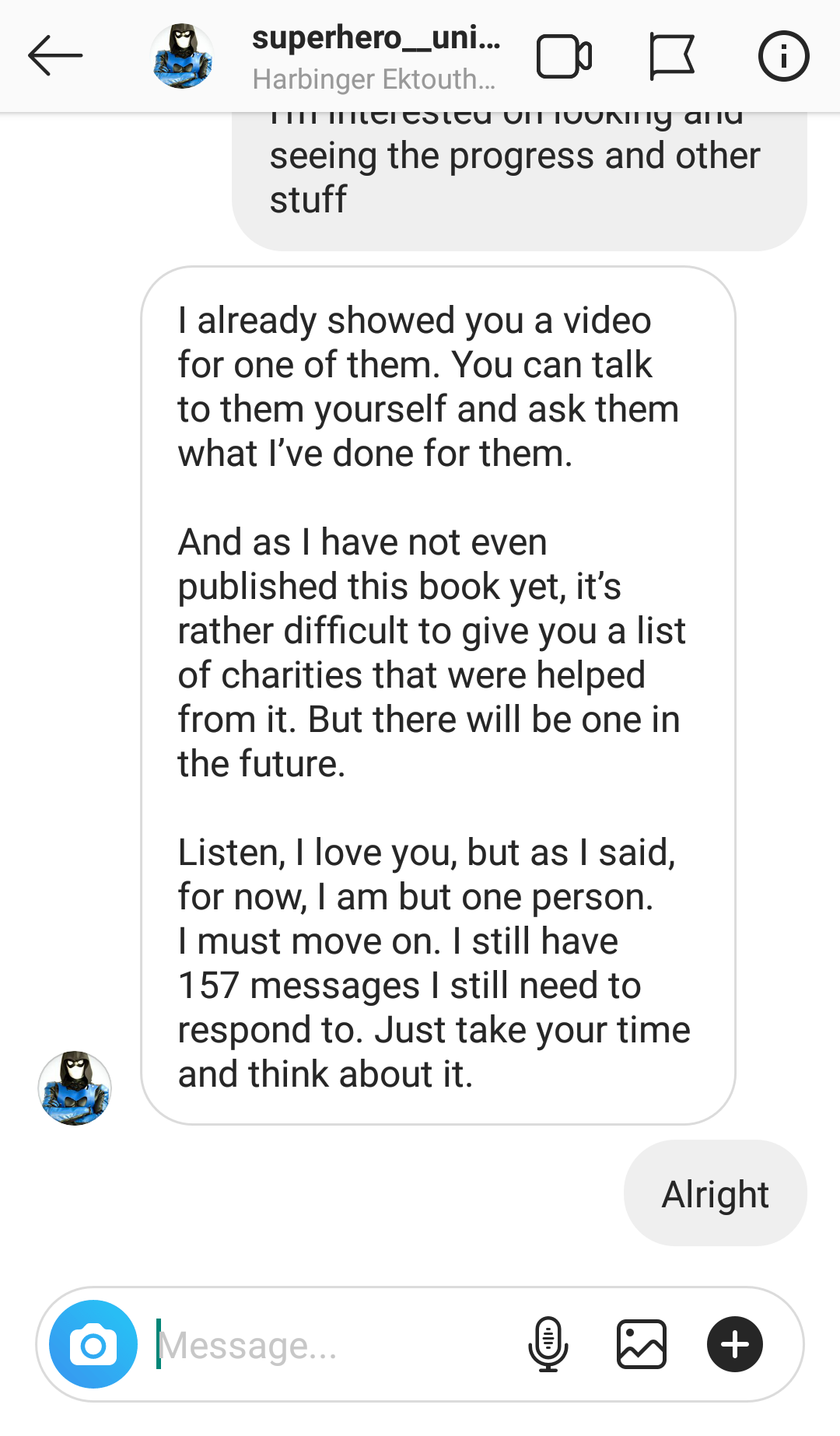 On his website, he claims to have an entire faculty of staff he calls "The Righteous League" and says they all have various fictional powers ranging from his teleportation to energy blasts to invisibility. This is obviously very fake, and there is no evidence these other people even exist other than promises they'll show at the Con events he's booked for.

So what is his real goal here? There is evidence to suggest he's only using the course to proselytize Jesus. There is his blog series, as well as a number of screenshots suggesting he thinks the only way to be a real superhero is through Jesus Christ. 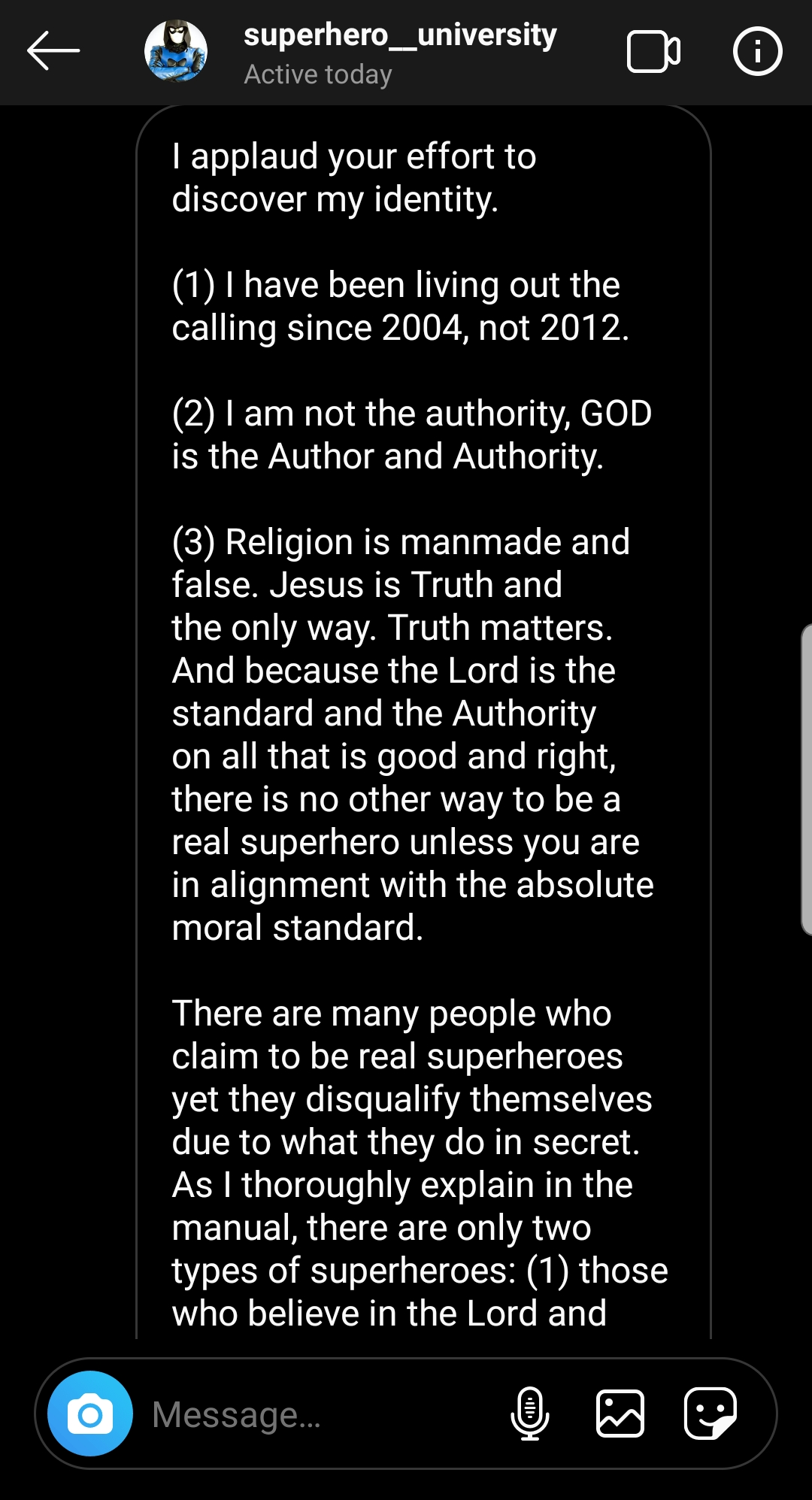 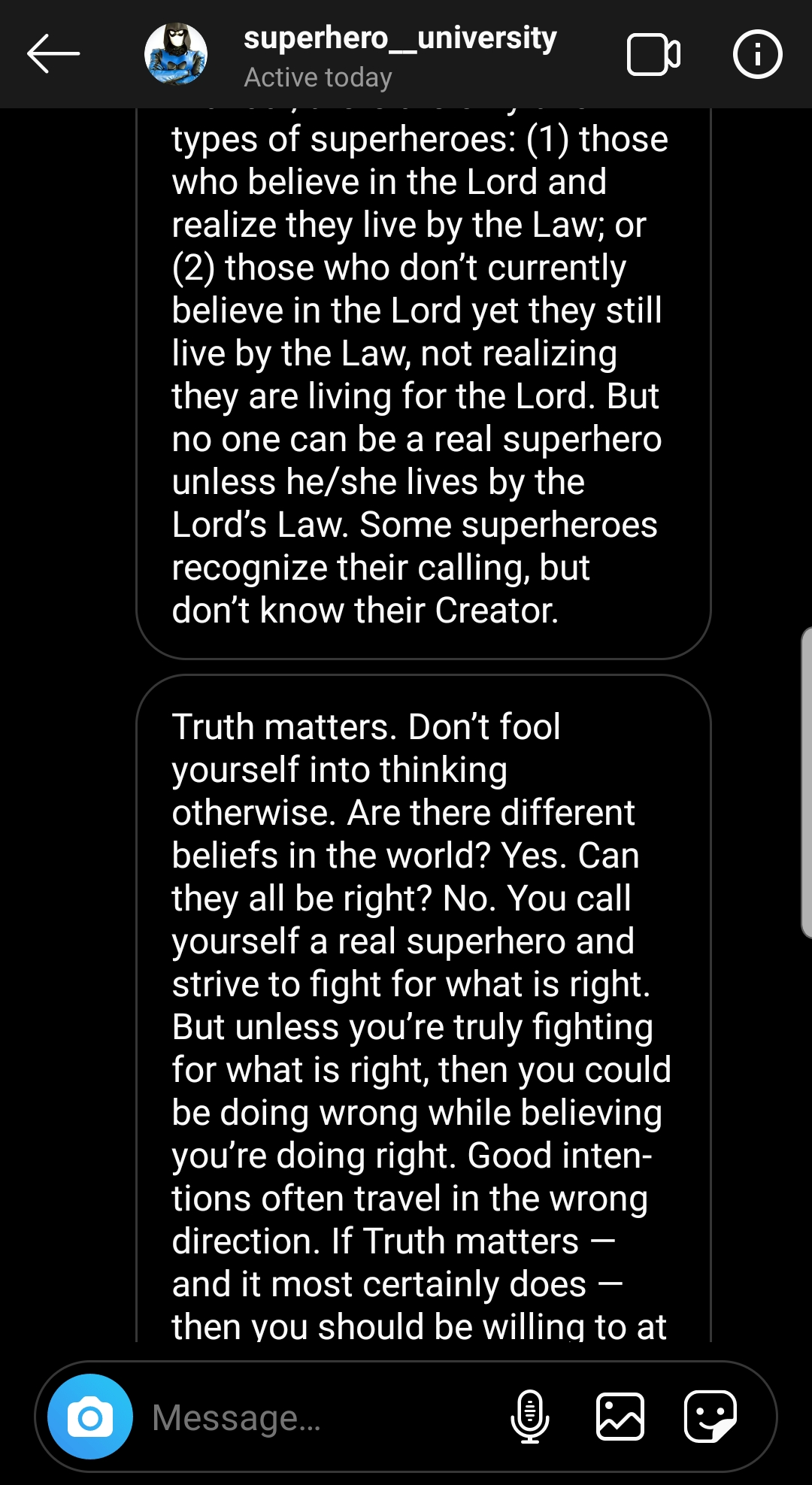 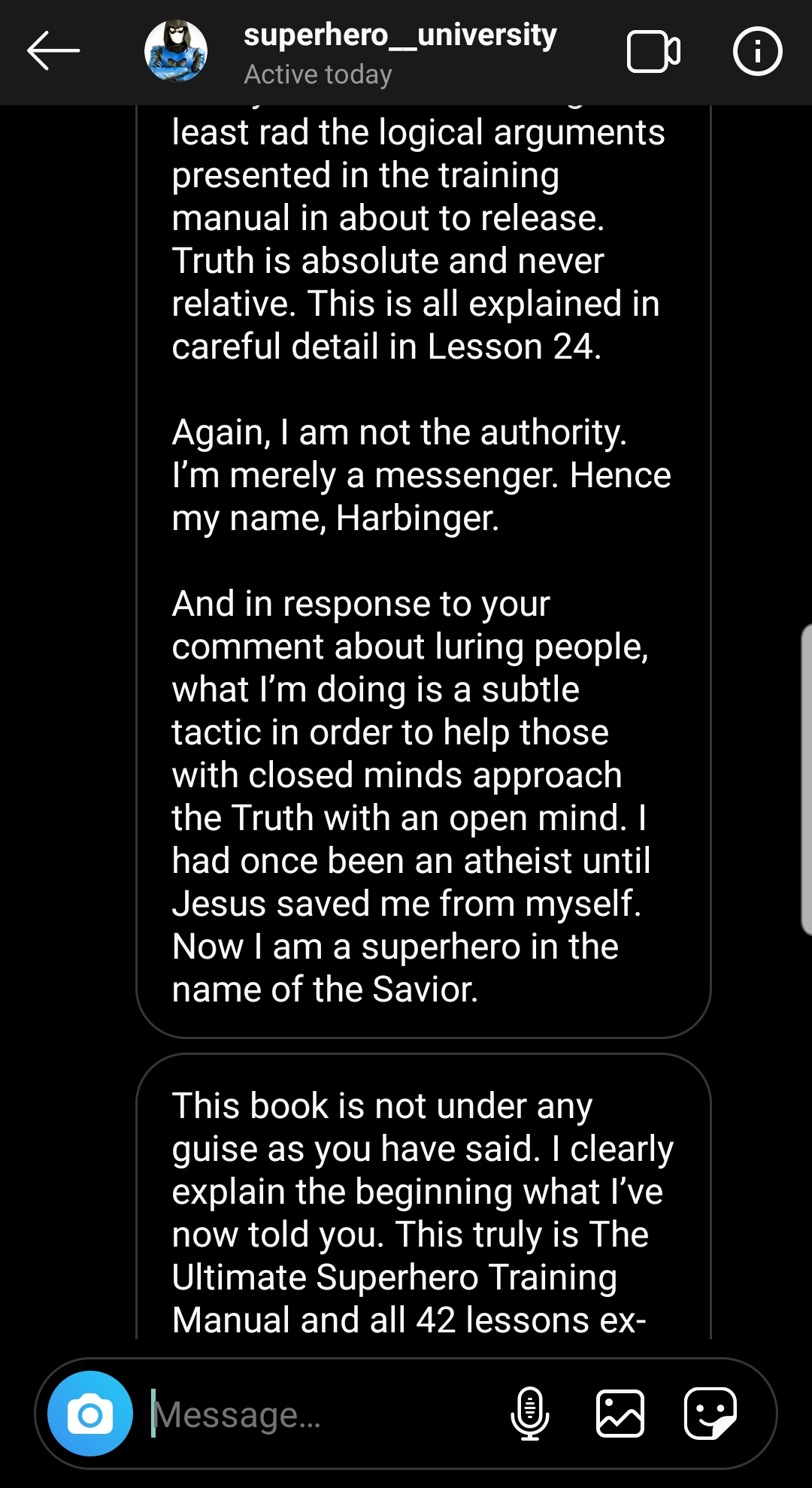 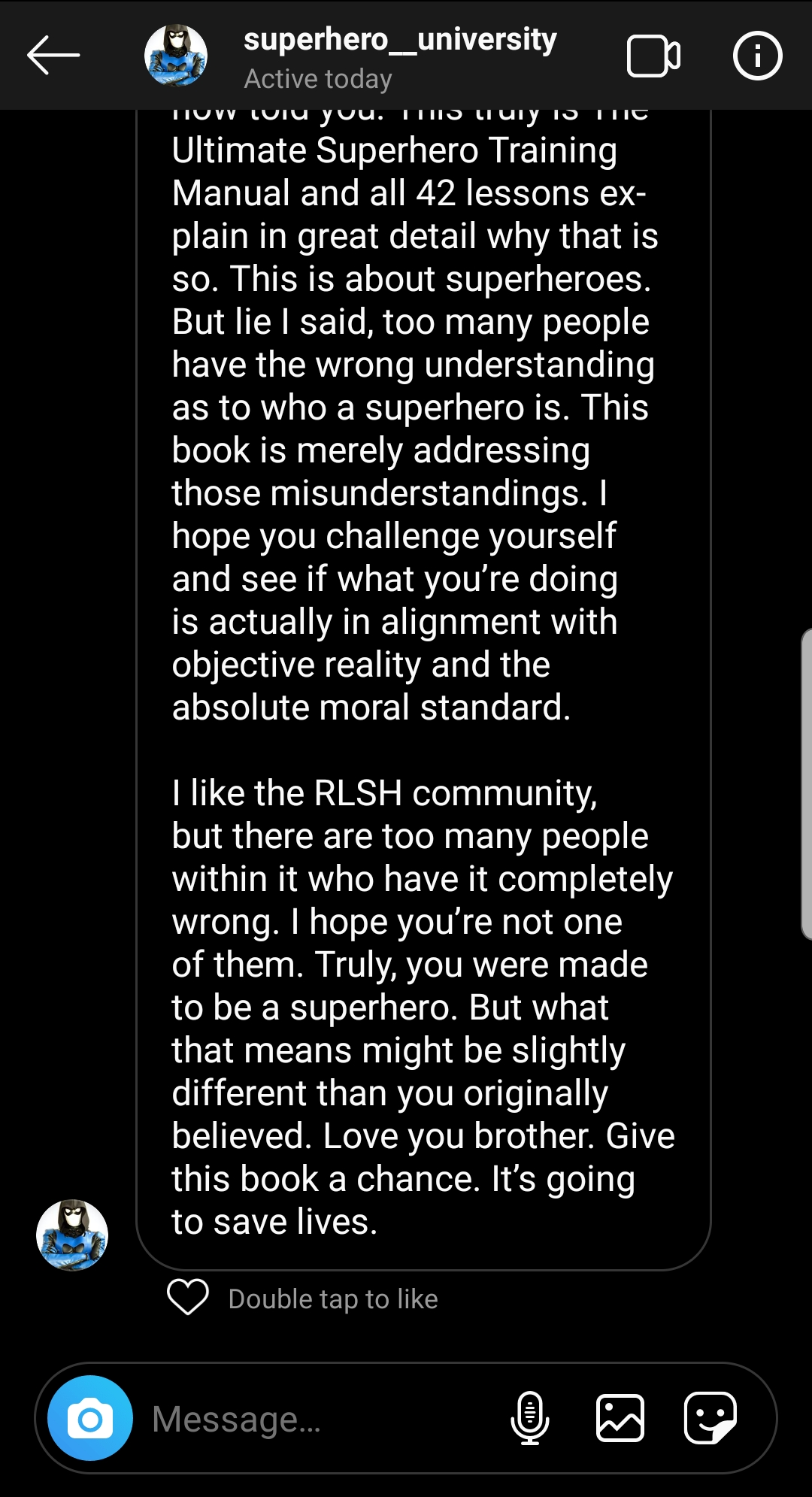 It is quite ironic to be claiming that "Truth matters" while also baiting people and being dishonest, but the truth has a way of coming to light.

His only responses to anyone saying anything have been variations of "buy my book and you'll see", "I will be giving money to charity", "real superheroes don't pick fights", and "I'm being slandered with lies". 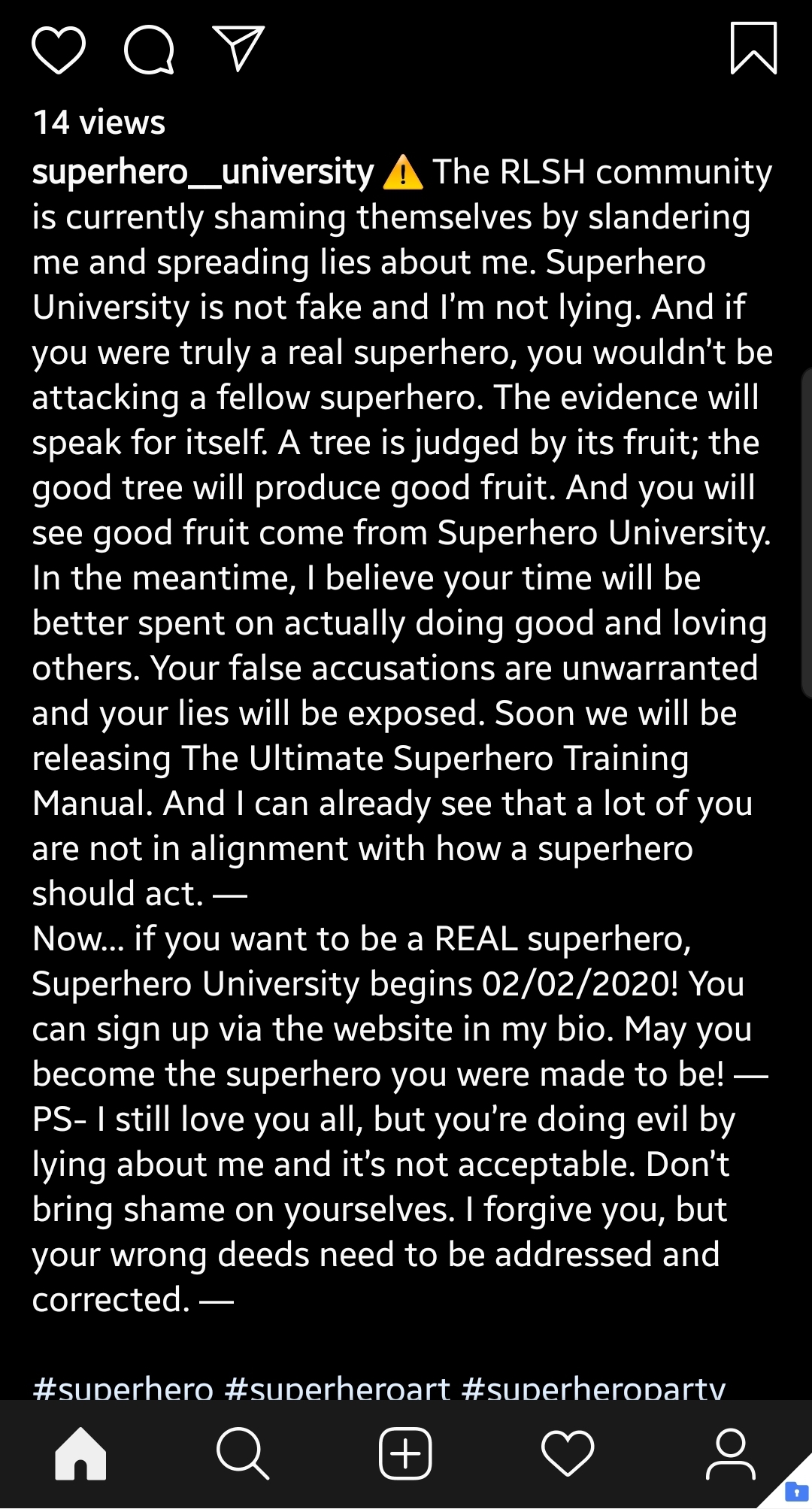 - Special thanks to Night Raider, Grey Shadow, Crusader, Midnight, Spectral Hawk, and The Resurrection for their contributions.

Also note this is not meant to be putting down any religion or religious figure.